A second helping of hot provincial fun from the Song For Britain archives:

Over the past few years I’ve been digitising my CD collection, and I now no longer own any CDs. Seeing all the tracks listed in iTunes made me realise that I have quite a few long tracks and quite a few short ones. And obviously quite a few medium length ones too. So I thought it’d be interesting to graph the distribution of song lengths, just for fun, and see if any patterns emerged. There are currently 35,043 tracks in my iTunes library, ranging from Otomo Yoshihide’s Isuzu, clocking in at a mammoth tenth of a second, all the way up to Vancouver New Music group’s reading of Cornelius Cardew’s Treatise (all too brief at almost 3 hours long). Here’s the chart, truncated at 16 minutes (nothing much of interest happens above this, so including the whole chart makes the peak at around 3 minutes less clear): 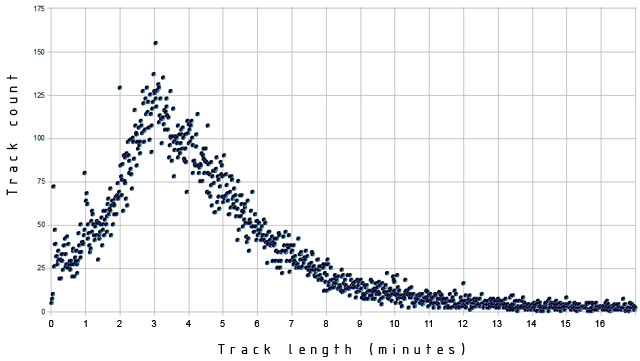 We all know about the cliché of the 3-minute pop song – 3 minutes being long enough to tell a decent story in a verse-chorus-verse format, but not so long that our attentions wander and we change the channel on our kitchen radios. Interestingly, the peak in length distribution of my song collection actually occurs at 3:02. I have 155 tracks clocking in at 3 minutes and 2 seconds, but only 127 that are exactly 3 minutes long. But what’s additionally interesting is the demographic of this 3:02 crowd – pop song length is not confined to pop songs. So as well as the usual crowd of indie rock classics, blues legends and easy listening pieces, we’ve got contributions from Russell Haswell, Alvin Lucier, AMM, CM von Hausswolff, Swans, Miles Davis, Thelonius Monk, Taku Sugimoto, Tod Dockstader, Hecker, Rehberg & Bauer, David Toop & Max Eastley and Annette Krebs & Andrew Neumann, none of whom are normally known for their chart-topping singles. This perhaps suggests a fundamental human attention span for optimum listening.

Other observations:
– 155 x 3:02 long tracks is 7 hours, 50 minutes and 10 seconds of non-stop music. What an awesome party that would be.
– There’s an interesting little cluster at the 10 minute mark. I suppose this is a result of the double figure of ’10’ being a psychological landmark for musicians – where no obvious verse-chorus-verse structure dictates the end of a song, it seems more worthy to fade out to give a nice big round number than a lowly, inadequate single figure.
– Other little peaks appear above the best-fit curve at other integer values – notably 1 (not shown here, because at 337 tracks it goes off the scale – largely a result of Fällt’s invalidObject series), then 2, 4, 5, 7, 12, but not really 6 or 9 (if you’re going to write a 9 minute drone, might as well stretch it out to last 10, eh?). Again, I’m thinking this is purely psychological. There’s something satisfyingly tidy about round numbers, and given the unstructured nature of lots of my music collection, precise timings are somewhat arbitrary.
– I made similar charts ages ago, back when I only had around 14,000 and 30,000 tracks in the library, and the overall shape of the distribution curve was very similar. At 14,000 tracks, the most common time was 3:06, but with 30,000 it was 3:00 exactly.
– Most interesting of all: the lengths I’ll go to to avoid doing any proper work.

Like me, you’ve probably noticed that the Republic of India is absolutely hopeless at football. They’ve never even qualified for the European Championship, let alone won it. Like me, you’ve probably also noticed that the Faroe Islands are pretty rubbish at football too. They may well have beautiful scenery, but they tend to lose a lot, and not just unlucky 1-0 away from home losses, or thrilling 6-5 goalfeasts. No, they often lose big-time, because they’re just a bunch of amateurs. To be fair to both teams, even if I was eligible to play for them, it’s highly unlikely that I’d ever be picked, because I am even worse at football than they are. But that’s somewhat beside the point.

What about the rest of the football playing nations? What about the big guns, like Brazil? Are Brazil so great because they have so many people to choose from? Are Wales so crap because they don’t? I decided to normalise the FIFA rankings as they stood immediately post-2010 World Cup to see which countries were objectively better at football. And which countries were objectively worse. The list makes for interesting reading. Because while it’s obvious for all to see that India is indeed rubbish at football, there’s an argument to be made for the fact that the Faroe Islands is the best team in the world.

So – it only takes 248 Faroese men, women and children to rustle up a single FIFA point. In contrast, over in South America, with Brazil languishing down in 168th place the behind mighty Yemen, Chad and Palestine, that one FIFA point requires the combined efforts of nearly 120,000 Brazilians! Sounds like hard work. But the real losers here are undoubtedly the Papua New Guineans. Almost 7 million inhabitants, and they simply can’t be bothered to collect even that one point. How truly contemptible.

Imaginary responses to pop songs, sung by the people referenced in the original song. See if you can guess the original. There are no prizes, not even if you get them all right.

The Burning You Are Experiencing Is Actually Caused By A Viral Infection. I Can Certainly See A Slight Redness and Swelling, But It Is Not Possible For Me To See The Burning Itself – It’s An Internal Symptom Of The Infection, In Much The Same Way That I Can’t See The Pain Caused By You Stubbing Your Toe
Doctor

Boys, I Really Appreciate Your Concern And Your Efforts, Which, I Should Make Clear, Have Not Gone Unnoticed Even Though Sometimes I Don’t Always Seem Particularly Thankful Or Aware Of What You’re Up To, But It Really Is Time I Learned To Start Doing Things By Myself, So I Don’t Want To Sound Rude Or Ungrateful, But Maybe You Could Give Me A Break For A Little While, Let Me Do My Own Thing, See How It Goes
Nigel

Okay, Any Particular Requests? Or You Just Want Me To Start Jamming, Or What?
Mr Tambourine Man

Hi Guys, Yeah, Sorry, I’m Afraid You’re Going To Have To Give Me That Number Again, I Did Write It Down But I’ve No Idea Where I Put The Bit Of Paper
Rikki

Well, Generally Speaking, It’s The Number Of Occurrences Of A Repeating Event Per Unit Time. Is That What You Wanted To Know?
Kenneth

We Did! It Was Us
The Canine Liberation Front

Oh, You Know, Not Much, Same Old, Same Old
Pussycat

Don’t Be So Dramatic, I’m Only Popping Out To Get Some Milk, I’ll Probably Be Back In Half An Hour
Angelina

Sean Paul Tremens – For The Bees (CD / Concrete Rapture, 2009)
Small scale re-enactment of Stockhausen’s legendary Helicopter Quartet, performed by gluing tiny radio microphones to four African bumblebees kept in a large tupperware container. While impressed by the concept of Stockhausen’s original work, the practice left me somewhat cold; I wanted so much more than just a string quartet with vertigo. In that respect, Tremens’ work is faithful to that which it pays homage. In theory: both an amusing satire of a musical landmark, and a legitimate study of the recent trend for down-sizing. In practice: four bees in a tin. Utter nonsense.

Go! Go! Michigan! – Go! Lo-tech (CDr / Go Lie Down Records, 2008)
Once upon a time, Japanese ex-Fluxus artist Yasunao Tone pioneered the use of ‘wounded’ CDs – scratched, broken, painted-on discs played on customised CD players to dizzying effect. Before him, Boyd Rice pioneered the use of locked grooves on vinyl records to hypnotically unsettling effect. Before that, Pierre Henry, Pierre Schaffer and the rest of the musique concrete crowd pioneered the use of magnetic tape splicing to revolutionary effect. So, what’s left? How about wax cylinders? It’s almost too obvious. The results? Exactly as you’d expect given that the album consists of 10 attempts to play badly damaged wax cylinders of ineptly sung nursery rhymes. Thomas Edison must be spinning in his grave (at around 90rpm).

The Olfactory Band – Arrivederci Aroma (CD / Home Improv, 2005, reissued 2010)
Collective of little known European improvisers, subjected to various overpowering odours in the studio during recording. Inevitably, the scents have a significant influence on the music: ‘Sweat’ is 5 minutes of itchy, claustrophobic and damp scribbling and scraping, whereas ‘Freshly Baked Bread’ is light, warm and yeasty. As a colleague discovered, it’s fun to listen to this for the first time without knowing the track titles and attempt to guess the smell. He got ‘Bad Eggs’, ‘Brand New Car’ and ‘Old Leather Shoe’ just about right, but was pretty wide of the mark for ‘Herring’, ‘Wet Dog’ and ‘Pavlova’. Entertaining and thought-provoking stuff.

The Khabarovsk City Radio Orchestra conducted by Ivan Skobrev Plays the Music of Mrs Vickers’ Year Three Music Class, John Masefield Primary School (CD / Vigorous Handshake, 2010)
An intense and atonal journey through 15 original compositions, varying in length from a brief 20 seconds (I Love My Cat, for 20 glockenspiels) to an exhausting 23 minutes (the relentless cacophony of Jemma Is Not Your Best Friend She’s Mine). Thoroughly hard work to take in one sitting, but ultimately worth the effort – repeated listens reveal many new details, layers and subtexts not necessarily appreciated on first pass. Would undoubtedly be interesting to experience in a live setting.