Gwaddol is a celebration of Theatr Gwynedd, the popular precursor to Pontio, built in 1974 and demolished in 2010. Here’s what I said about the exhibition when put on the spot with a voice recorder by Pontio’s marketing team:

“I admit to feeling a bit daunted when I was first approached about doing this, as it was clear from the outset what a clear sense of community there was around Theatr Gwynedd. There were so many people who knew each other, worked together, grew up together and one of the most interesting things for me was finding out these stories – these stories and people who had grown into local legends.

“I feel really warmly towards the place now, though I never went there myself, and it seemed there was lots of fun to be had there. So that was something I really wanted to come out in the exhibition. It’s all very well doing a very serious and sombre reflection of the history of Theatr Gwynedd, but from speaking to people who were involved with it, it really seemed as if it was a good, fun happy place so I wanted that to be reflected.

“Rather than a memorial, I wanted it to be a celebration which maybe triggers memories. I really hope that people who do know what Theatr Gwynedd did can connect with this – whether it’s one of their stories used for something, or they see an object and it reminds them of a good time they had there.” 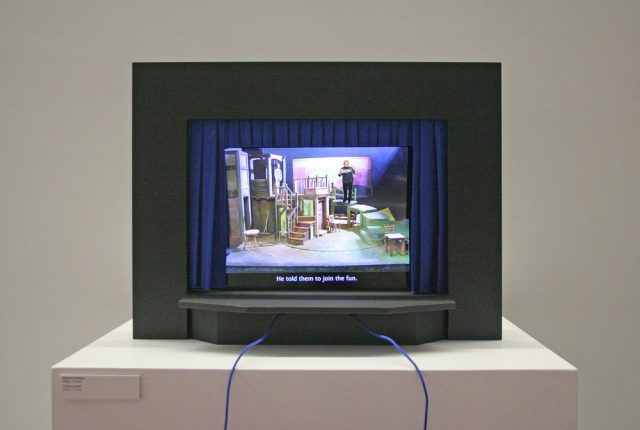 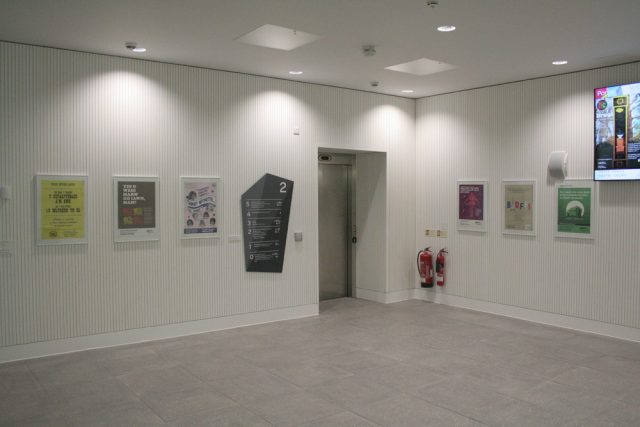 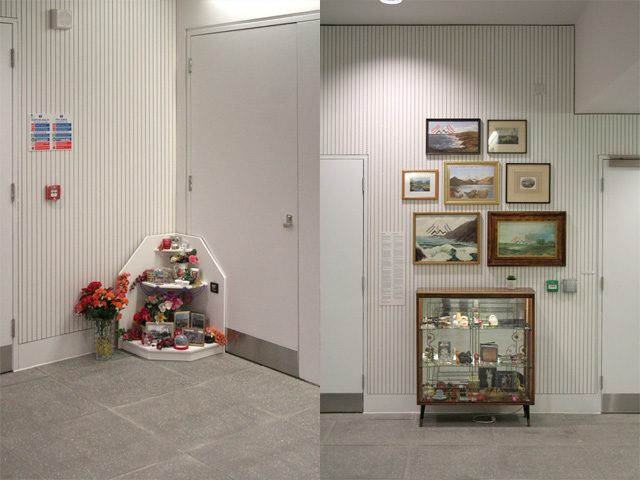 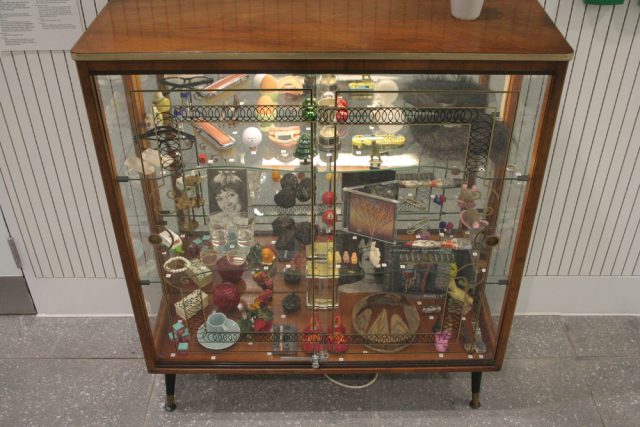 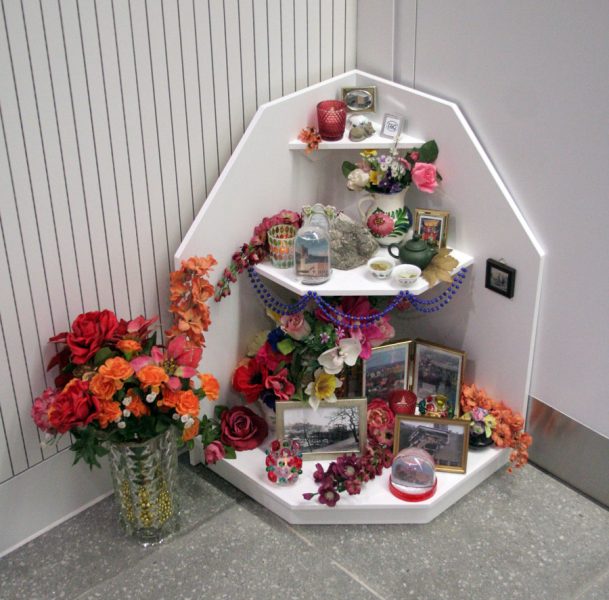 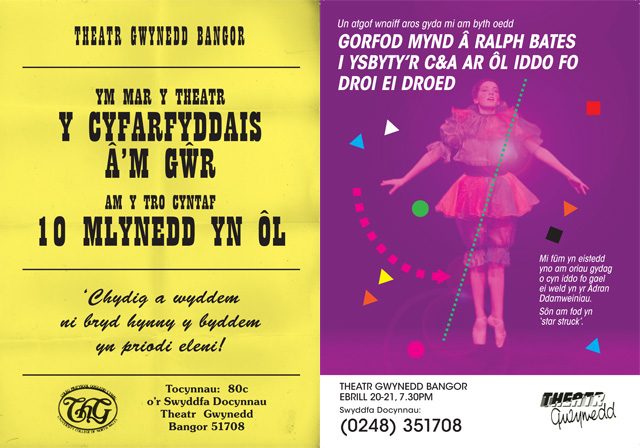 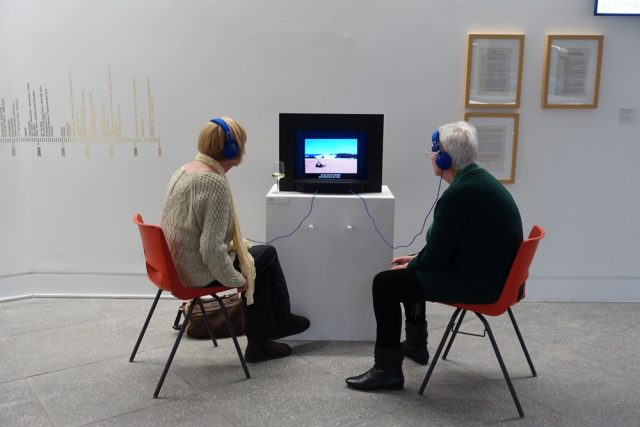 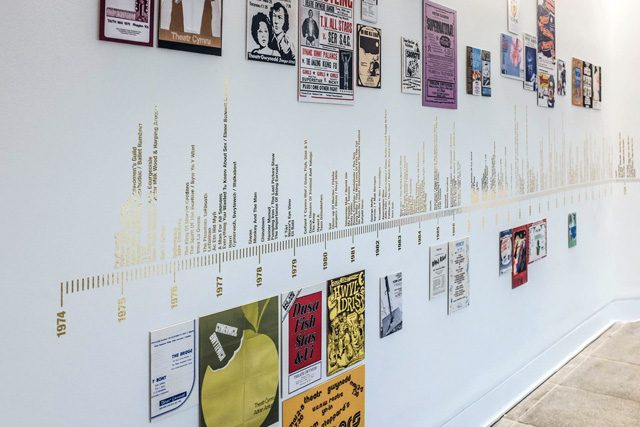 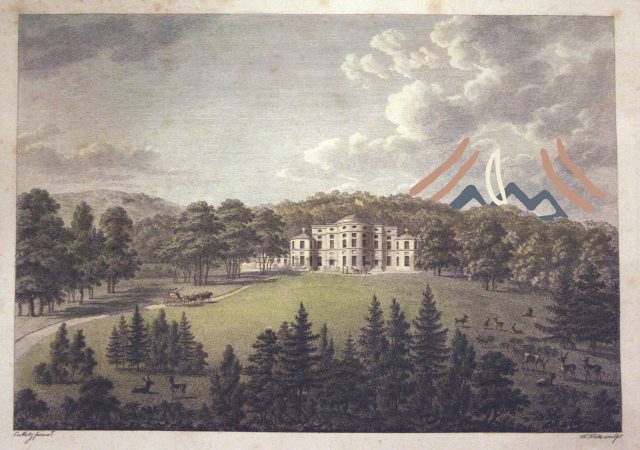 Cabinet of Curiosities
A key part of the exhibition was memory and storytelling. Members of the public & former staff were invited to share their memories of Theatr Gwynedd. The cabinet gives life to some of these vignettes: each of the items in the cabinet is linked to a memory, printed separately on an adjacent panel.

Mountains
A series of found paintings and prints, modified to include the old Theatr Gwynedd ‘mountains’ logo as part of the scene. The concept here is how largely the theatre figured in the cultural landscape of north Wales.

Shrine
A multi-faith roadside shrine to the memory of the theatre.

Posters
Six posters in the style of various theatre productions through the ages, all with text sourced from a member of the public’s recollection of the theatre.

Video
Hour-long compilation of talking heads, green-screened to give a humorous twist to each story.

Golden timeline
Key events, performances, film screenings and productions in the life of Theatr Gwynedd, with reproductions of corresponding promotional materials. This one proved to be very popular with visitors.

Memorandum on Auditorium
A poignant reproduction of an impassioned and ambitious 1969 theatre design proposal by leading theatre designer John Bury, alongside a flat rejection of such by the Theatre Building Committee.

“Staff presenting themselves for duty in untidy wear has been a worrying factor for some time. Theatre-goers have complained of being unable to identify theatre attendants.
Uniforms have, in the past, proved unsatisfactory in that they either do not suit certain female figures or remind one of Woolworths!”