Like one of those infuriating rural bus services that publish no music for years and then suddenly release two albums at once, I’m delighted to announce that despite not having published any music for years, I’m suddenly releasing two albums at once. I’ll write more about these later (maybe – no-one’s actually reading this, are they?), but for now here are the plain facts:

While driving along one of Britain’s motorways recently, I was overtaken by a lorry that was prominently decorated with the web address SPLOGISTICS.CO.UK. It amused me because SPLOGISTICS is a funny word, but it was especially amusing because my initials are SP, so if I had a logistics company, I’d definitely want to call it SPLOGISTICS. So, on returning home I immediately established the following companies. Their main line of business should be self-explanatory.

A list of people it’d be confusing for me to share a hospital waiting room with, sorted by increasing potential for confusion.

There are three (and only three) components to a standard UK egg custard:
1. The pastry: that noble and unheralded support layer, quietly carrying out its duties with pride and grace.
2. The custard: that champion heavyweight that we’ve all come to see, that we remember watching on Grandstand as a kid, but that’s still knocking ’em out cold in town halls and leisure centres throughout provincial Britain.
3. The nutmeg: that cheeky young scamp from faraway lands that occasionally appears at your window, mouthing unintelligible words while you attempt to watch the news.

I once had in mind to write a comprehensive guide to the country’s egg custards. Not just a survey of my favourites, or the ones near me, but a rigorous analysis of every commercially available custard in the land. Even given the homogenisation of most UK High Streets, though, it’s a huge and dietarily thankless undertaking, and I have reluctantly added this to the list of things that are just not going to happen, along with learning to play guitar, getting into the album charts, tidying my office etc etc. This move brings both sadness and relief. Having said that, I still have a rough idea of my favourites. In the same way that we like to choose some personal cultural standards to wheel out when asked, instead of having to consider them from scratch each time (favourite album, film, that sort of thing), I have a best egg custard. Best 5, in fact. I am compelled to write all this now because the current number 1 was discovered this very week – I could have wept when I first bit into it – and discovering a new favourite anything is a big deal for some. Here they are:

Supermarket egg custards are sometimes pretty good. M&S are the best, I think. The flipside of all this is the worst. I’m generally fairly well disposed towards Morrisons, as supermarkets go, but their egg custards have never, after multiple attempts, been anything other than joyless.

Here’s the track list for my forthcoming contemporary blues album. It’ll be available on LP, cassette, minidisc and 64kpbs mp3.

Here’s a quick guide to some of the best new music due for release later this year.

New albums by:
DJ Unexpected Item In Bagging Area
The You Must Be Logged In To Do Thats
The Restart Now / Restart Laters
/X\(‘-‘)/X\
She Takes A Single Paperclip & The What Happens Next Will Amaze Yous
This Vehicle Is Reversing 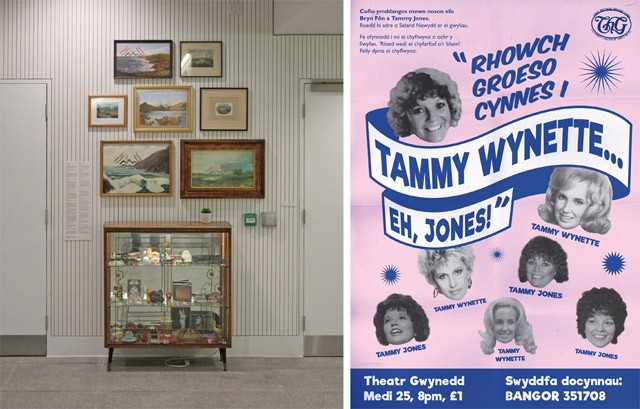 If you find yourself anywhere in the vicinity of Bangor (Gwynedd, not Co. Down) over the next 3 months, then please consider calling in to Pontio, the new and exciting Arts & Innovation Centre. It’s an interesting place with lots of things going on, but in addition to those interesting things, you can see my new multi-media exhibition, Gwaddol, for free.

Gwaddol is a celebration of Theatr Gwynedd, the popular precursor to Pontio, built in 1974 and demolished in 2010. Here’s what I said about the exhibition when put on the spot with a voice recorder by Pontio’s marketing team:

“I admit to feeling a bit daunted when I was first approached about doing this, as it was clear from the outset what a clear sense of community there was around Theatr Gwynedd. There were so many people who knew each other, worked together, grew up together and one of the most interesting things for me was finding out these stories – these stories and people who had grown into local legends.

“I feel really warmly towards the place now, though I never went there myself, and it seemed there was lots of fun to be had there. So that was something I really wanted to come out in the exhibition. It’s all very well doing a very serious and sombre reflection of the history of Theatr Gwynedd, but from speaking to people who were involved with it, it really seemed as if it was a good, fun happy place so I wanted that to be reflected.

“Rather than a memorial, I wanted it to be a celebration which maybe triggers memories. I really hope that people who do know what Theatr Gwynedd did can connect with this – whether it’s one of their stories used for something, or they see an object and it reminds them of a good time they had there.”

Hi there. I thought I’d better let you know that I’m no longer artist in residence at Oriel Wrecsam – that stopped back in March, but the lack of an update probably made it look like I’m still there. If you’re wondering what I’ve been up to (not that you were, but if you were), check out the community cinema I started, and make sure you come to our next event on the 9th October: New Dot Cinema. Bye!

I forgot to tell you, but I’m currently Artist In Residence at Oriel Wrecsam, documenting and archiving the gallery before it moves out of its current location and into a temporary off-site phase.